Do you know anybody who would enjoy an airplane wall mural? This interior design idea is not reserved only for pilots or stewardesses. It’s also perfect for anybody who loves traveling, for engineers who are passionate about the effortless flight of these giant steel machines, as well as for every fan of spacious rooms because the decoration can help you to optically enlarge smaller interiors. Our collection includes many different images of planes from historical ones to the most modern models so that everybody can find something appealing. What’s more, you can also consider using a plane wall mural to decorate the room for your teenage children, especially if they’re interested in aviation or enjoy watching war films. 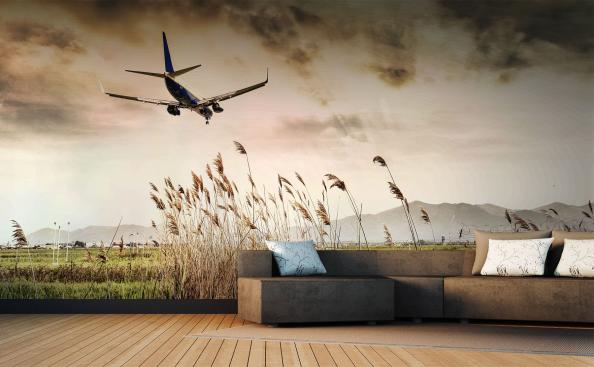 A mural with a plane can become your ticket for a complete living room transformation. Is that an exaggeration? In a moment you’ll see that it’s not. This type of design is the fastest and most effective idea to change the look of a cramped living room. The view of a limitless sky with a majestic silhouette of an aircraft will immediately conjure up some extra space in any small interior. The illusion of depth will trick your eyes and make a flat wall look like a vast, cloudy expanse. What to consider when choosing the optimal image? Passenger planes wall murals should ideally feature a light, sunny background. This combination allows you to maximize the illusion of depth. One fantastic design is an image of a Dreamliner bathed in the golden rays of sun, soaring over a fluffy carpet of clouds against a beautiful blue sky. This photograph will work wonders in modern, minimalistic, and industrial arrangements alike.

There was a time in the past when flying was reserved only for winged creatures. Today, anybody can fly high into the sky and travel thousands of kilometers in a blink of an eye, almost as if they teleported. The construction of the first flying machine was the culmination of a centuries-long dream about flying. That’s why we thoroughly believe that an airplane wall mural depicting the machine against fluffy clouds is a perfect design for a true dreamer who has their head in the clouds. This decoration will quite literally become a source of heavenly atmosphere in your interior. It will completely transform its appearance. The picturesque photographs will also definitely appeal to any avid traveler. In this case, we recommend using designs with the most charming views. What kind? That depends on your preference. You can go for snow-covered mountain summits, turbulent sea waves, or an exotic, tropical island. If that doesn’t convince you, we have one more 3D airplane mural motif! A plane flying over a modern metropolis will enchant any big city lover. We guarantee it’s going to look breathtaking! 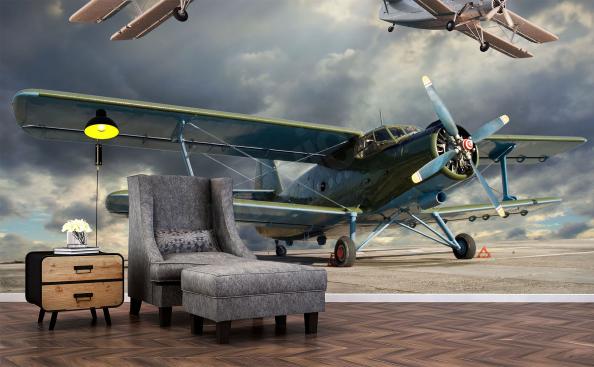 A stunning mural with a plane for a teen arrangement

Teen arrangements should be exceptional in every aspect, that’s why we recommend using our warplanes wall mural. These designs are perfect for a person who’s interested in history (especially World War II) and likes watching war films which depict jaw-dropping battles in the sky. The mural will also work wonders in a room of a young engineer who dreams about constructing modern machines which would fly even higher and faster. Our collection features dozens of designs so you’re bound to find something suitable. If you don’t like photos, you can opt for a high-quality computer graphic, or a flat design image, which are known for their striking, minimalistic qualities.

Plane wall murals for children who want to become pilots

Every child has an idea about what they want to be when they grow up. One of the most popular childhood dreams is becoming a pilot. It entails the ability of controlling a giant flying beast but also opportunities of frequent trips, sometimes even to the furthest parts of the world. If your little bundle of joy wants to one day sit in a Dreamliner’s cockpit, consider using an aeronautical decoration in his/her room. There are two ways to use an airplane wall mural in a child’s room. If your children are still small, we recommend a cartoon version of the motif. However, if your kids have already grown out of these types of decorations, you may want to opt for a breathtaking photograph of an ultra-modern passenger plane or a historical model with two sets of wings, the so-called biplane.