Every city has its own unique character. Some of them became world famous thanks to their uniqueness! One of such cities is New York - the most well-known metropolis in the USA. New York stickers offer many wonderful and recognizable motifs, which can be used as decorative themes. Towering skyscrapers, the Statue of Liberty, Central Park, yellow taxis – these are just some of the most interesting symbols. Each of them is unique in its own way. So, in order to make the choice easier for you, we'll show you how to use each of these wall stickers. New York City is a great decorative theme which can be used to embellish doors, furniture or even everyday objects. 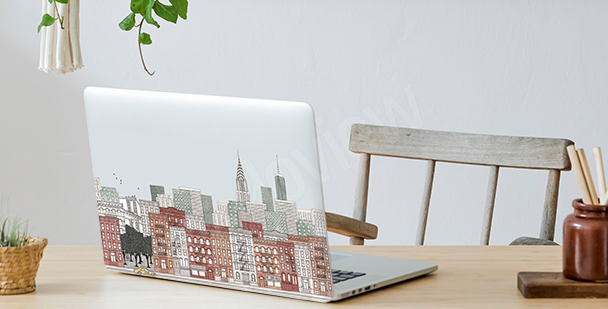 A sticker is always a great and unique idea to decorate your laptop. This New York design will bring a spark of joy into your everyday life. 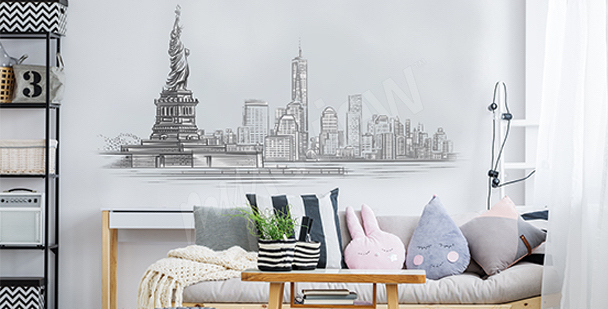 A sticker with a black-and-white design won't overpower the interior and will work wonders in light interiors. 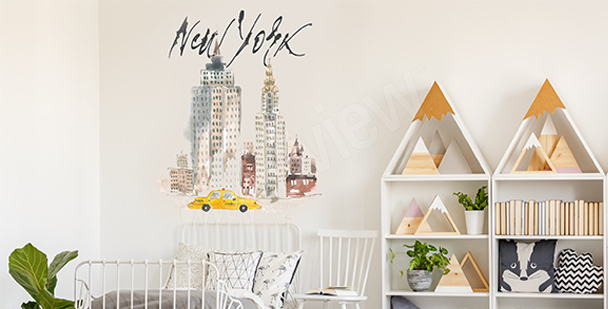 Your teenager's room needs a revamp? Try a sticker that will easily and quickly transform the interior. 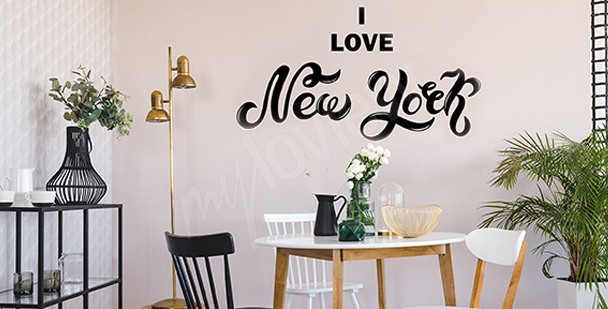 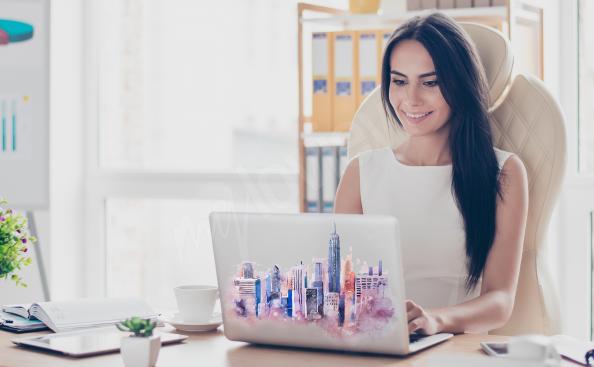 New York is a big melting pot, in which there has always been a place for everything – this is how a famous New Yorker, director Martin Scorsese described his hometown. It's hard to disagree with his opinion. This American metropolis is an infinite source of excitement – always offering something new. It's no wonder that New Yorkers think that they live in the center of the world! Therefore, the Myloview team decided to utilize the city's enormous potential and depict its many faces on decorative New York stickers. You can also find designs which focus on monuments, buildings, road traffic, storefronts, neon signs, or street names. The choice is almost endless! So, there's only one thing left to do – start looking for a sticker that is to your liking and repeat after Martin Scorsese: in New York, there is a place for everything!

American New York wall stickers with the symbols of the city

New York like every city (especially one this big and famous!) has a wide array of symbols and motifs, which instantly make you think of it. In this case, they are especially distinctive. New York has been used as a filming location for many movies, which makes some places easily recognizable by people all over the world, even if they haven't visited the city before. All of these symbols are depicted on our New York stickers, which are designed to show one object or theme. It's a type of decoration that looks best in a smaller format, e.g. on furniture, doors, or a laptop. Here's a selection of the most interesting offers straight from the most popular city of the USA!

– The Statue of Liberty – this colossal sculpture is located on Liberty Island at the mouth of the Hudson River and is probably one of the most recognizable landmarks in the world, right next to the Eiffel Tower, the Great Wall of China, and the Egyptian pyramids. The female figure with a crown, holding a torch is seen as a symbol of the United States of America and its values. A photograph of the liberty goddess will look great as door sticker. There's no motif that would be more characteristic and famous in the whole of New York! 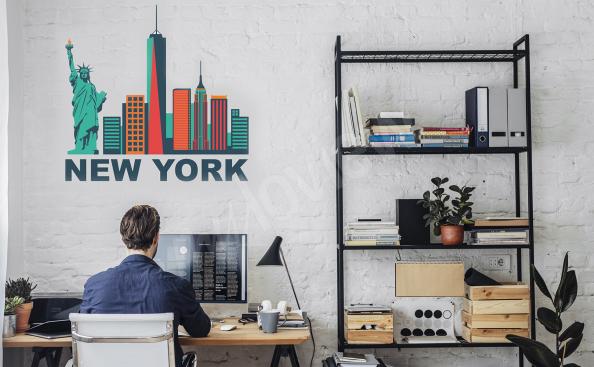 – The Brooklyn Bridge – another "great" landmark that can be found in this wonderful city. Even during its construction it was considered an architectural miracle and a symbol of the technological advancement. Today, it remains one of the best-known bridges in the world, mostly thanks to many movies which were shot there. It doesn't matter which element of the Brooklyn Bridge appeals to you the most, you should consider using it as a decoration in form of a sticker. New York has a lot of distinctive architectural structures, but the Brooklyn Bridge is one of a kind!

– Yellow taxis – this time it's not a single object but... a whole bunch of them! Moving around New York can be a challenge. About 8,5 million of people live in the city and the subway isn't always capable of accommodating all the passengers rushing to work or meetings. Fortunately, New Yorkers can always opt for a yellow taxi. The yellow taxis can also be used as a fantastic decorative motif in a room of a motorization fan.

People who think that New York is a grey, sad city covered in concrete will be surprised to know that the city center is a wonderful green oasis covering 350 hectares! We are talking, of course, about Central Park – the favorite getaway for New Yorkers. So, if you're looking for decorations that depict the New York City, but you want to be original and need something inspired by nature, then Central Park stickers are ideal for you!