Trees
-+By interior
-+By category
More+

Little – and not so little – boys usually have quite a clear vision of what their room should look like. They often have their favorite hobby they devote a lot of time and attention to, specific likes and dislikes as well as favorite ways of spending free time ... That's why we think that when choosing posters for boys it is worth leaving the final decision to the room owner. And all the more so because the decoration often turns out to be the most expressive element of the decor! We have prepared for you a handful of inspiration and ideas that we hope will help you choose the most interesting posters for a boy's bedroom and create a unique room arrangement.

Filter:
-+By interior
-+By category
More+ Teddy bear on the moon

A motif with a teddy bear is an extremely adorable and universal idea for children’s room décor. Poster for a boy's room with mountains

This poster with mountains will appeal to young travellers, amateurs of excursions and explorers of mountainous regions. Poster for a boy's room with the alphabet

A poster depicting the alphabet and animals is a perfect combination of learning and fun. It’ll also help your child absorb knowledge much faster. 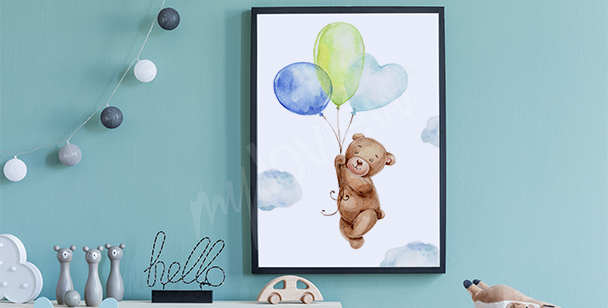 Dinosaurs, music and space travels: posters for a boy's room Decorating a boy's bedroom – or decorating a child's room in general – is always a challenge. Every parent knows that, especially in the case of slightly older children, negotiation skills are an absolute necessity: how else can you strike a balance between the parent's refined taste and the child's developing taste.

In the case of a boy's room, it is even more difficult as many manufacturers of interior (decorators)? seem to think that boys only like the color blue, cars and football. And yet their interests are so much more diverse! Not only interests though, but also – or perhaps above all – tastes. Having said that, we do not advocate giving up the use of the color blue altogether in creating arrangements in a boy's style. Blue is, according to research, the most liked color in the world: in surveys most people, both women and men, say that it is their favorite color. However, we strongly encourage you to look at this issue somewhat ... more broadly. A poster for a boy can be a lot of help here! In order to inspire you to find your own style, we have prepared not one, not two, but three boy's bedroom design ideas that are not just all blue. Each of them includes suggestions on how to creatively incorporate original posters. Are you curious to learn more? Then be sure to read our guide!

For many young people, both boys and girls, music is one of the important elements of creating their own image. Even younger teens may strongly identify with their favorite music genre: be it hip-hop, punk, heavy metal or other styles. If your son can't imagine living without his favorite tunes playing in the background, he will be delighted with room decor inspired by music! A poster for a boy's room featuring the image of his favorite artist or band - or, better still, several such posters – will be a great complement to this type of arrangement. Other elements of the decor should also be adapted to the boy's favorite musical genre: if he is a fan of hip-hop, one of the walls can be covered with faux brick, which he could then decorate with graffiti, for example. And if he loves rock music, he's bound to appreciate rock elements in the decor – maybe a leather armchair or wallpaper with a guitar pattern? 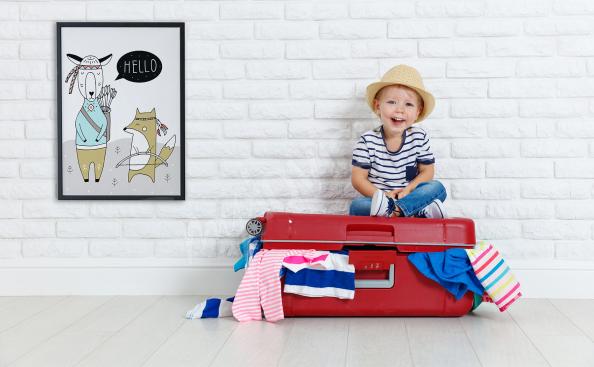 With a camera among animals

When the first royal baby, Prince George, was born all tabloid reporters were wondering what the baby's room would look like. After a short time, a rumor appeared and was quickly confirmed, at least unofficially, that the nursery will be decorated with motifs referring to the African savannah and animals inhabiting it! As you can easily guess, the popularity of "animal" ornaments for children's rooms increased tenfold almost immediately – and yet they were already quite popular in the first place, because animals are one of the most suitable motifs to be used here. If you also like various animal themes, you will find many posters for boys featuring such motifs on our website! You do not need to limit yourself to the savanna motif: try images of forest animals native to Europe (add dark green walls and some decorations in the shape of trees or mushrooms, for example), the fauna of the seas and oceans (blue walls would be perfect here!)... There are a lot of possibilities, and a young animal lover who wants to be a vet in the future will certainly love this kind of arrangement.

Minimalism in the Scandinavian style: modern posters for a boy's bedroom

Minimalism has been one of the most popular interior design trends for a long time – it is natural that it is not only present in "adult" interiors, but also in the decor of children's rooms. And although at first it may seem unsuitable here: lacking interest, colors, not quite "fairy-tale", we think that there are a few good reasons why it would work in a boy's bedroom.. The most important of them is a kind of "timelessness" of this type of decor: you can be sure that it will not look too child-like too soon! Minimalist posters for a boy's room, with designs such as typography, simple geometric patterns or abstract art – patterns that could also appeal to adults – will be a great addition to a simple, functional interior decorated in light, neutral colors.

Pop art is the quintessence of the wild art from the 60s. Color play and graphic depictions straight out of a comic book, popular culture references and mass consumerism translated into the language of art.
Read more
Rankings

Music posters in a teenager's room

You must admit that a teenager’s room without any music posters hanging on the walls would look weird, right? Kids love to decorate the walls of their rooms with posters of concerts or the ones that depict their favourite bands. And if they have a good music taste (let’s hope they do!), then why shouldn’t they also learn something about the art of interior design?
Read more