Murals by category - City by night

A staunch city slicker can never be convinced you that life outside the city even exists. On the contrary: a city enthusiast cannot imagine ever living anywhere else! Nature? Calm? Tranquility? Sparse population? Yuk! What a nightmare! If you too consider yourself a typical city slicker, you will love many of our city at night wall murals. An essence of nightlife in the city: this 3D mural will make you feel like you are always in the center of the action. Read the guide that we have prepared for you to learn how a carefully chosen city at night mural can transform your interior, giving it a truly unique style.

A stylish city at night mural in your home 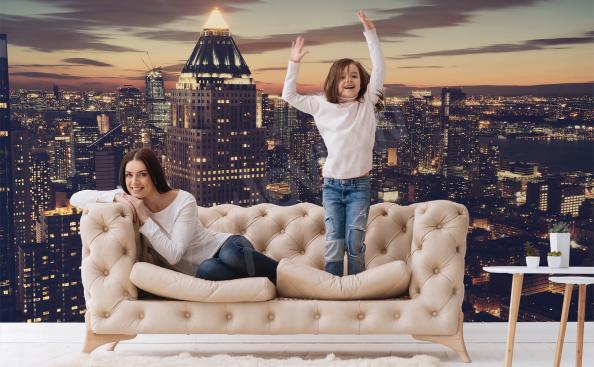 A city, especially a big one, at night is a truly magnificent sight. Colorful lights stretching as far as the eye can see, some of which remain motionless, while others are in constant motion... A wonderful sight: almost like the northern lights for people who don't live near the pole! Those who are not too keen on cities say that they are all the same: big, loud, grey, crowded and often with an unpleasant smell to them. City-style enthusiasts claim the exact opposite: every big city is different and each has its own unique style recognizable at first glance! Seemingly they all have similar wide streets, similar skyscrapers, and almost identical shopping malls... Yet at the same time, each of them stands out from the others with a multitude of smaller and larger details that determine the city's unique, individual character.

We really don't think that anyone could confuse Paris with Dubai, Rome with London or even Warsaw with Barcelona – either by day or at night. No way! It has to be said though that regardless of whether your city at night wall mural depicts New York or Moscow, one thing is certain: it will be a very expressive decoration of any interior you choose to use it in. How to do it? We have prepared a few tips for you – we hope that you will find a city here with which (not "in which"!) you decide to live!

What are the advantages of city at night murals?

As mentioned before, "nighttime and urban" murals, although all different, have some distinct common features. It's a good idea to point out a few of them! The most important is the color scheme: very intense, dark, and high-contrast. 3D city at night murals are often also very colorful: especially those depicting views of the cities famous for their neon lights, such as New York and Hong Kong. But the advantages do not end there! A three-dimensional city at night wall mural will make the space you decorate with it seem much bigger than it actually is – especially when you choose a wide, panoramic design. Moreover, the larger the wall surface you cover with it, the more expressive the result. For this reason, a 3D city at night wall mural may be an ideal decoration for a small, slightly cramped interior, such as a hallway or a bathroom. 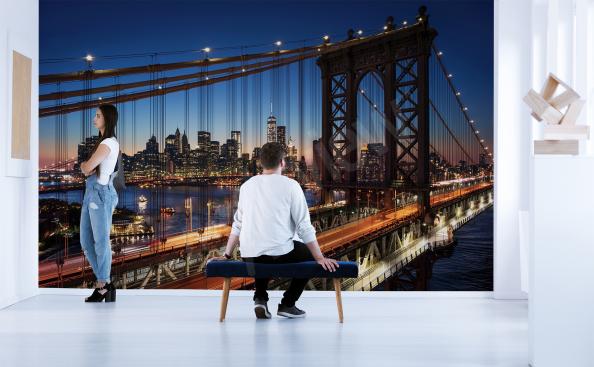 You probably wonder what kind of interior best suits a city at night mural. What interior style works best with this kind of view? We have some suggestions for you:

Minimalist style: An ascetically decorated interior in a largely white color scheme provides a wonderful contrast for the dark, or even colorful mural. Moreover, it is worth noting that a city at night wall mural, despite its spectacular look, does not take up any of the precious space in your room, in line with the minimalist principle of limiting the number of objects in an interior.

Industrial style: A black and white version of the mural is hands down the best choice in this case. This extremely limited color scheme will be a great fit for the raw character of this kind of arrangement (in our view, it will look particularly good in the kitchen – how about applying this mural to the wall between the upper and lower cabinets?), and at the same time it will emphasize the fact that industrial style, despite its futuristic connotations, is in fact very retro in spirit due to its references to the design of industrial plants from decades ago.

Eclectic style: Can you think of anything that better reflects the idea of diversity than a view of the streets of London or New York? Not an easy task, right? As eclectic style usually puts emphasis on an abundance of vivid colors, the perfect match will be graphics featuring many neon lights, signboards of shops, people and cars: a mural that depicts a city pulsing with night life!