Football murals enjoy the most attention among other sports wallpapers. And that’s because of football’s incredible popularity. It is often called “the queen of sport”, and it’s not surprising. People from all around the world watch football matches and the “football industry” hires over 300 million people. Football murals are a great way to arrange a room of a true football fan.  They will also be a good decoration of a sports shop or a pub that offers match broadcasts for its clients. A spatial mural of a stadium seen from above will make your interior look much bigger. Football murals, a fight for good 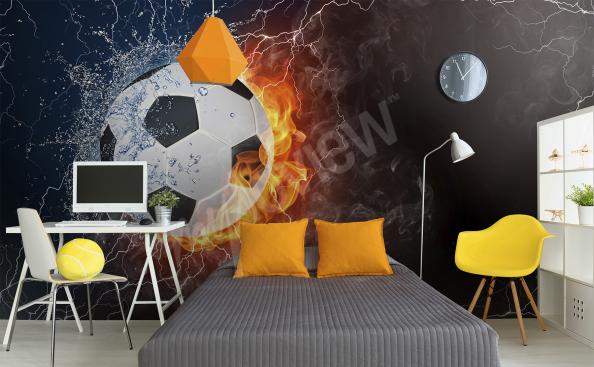 While looking at wall murals football, we rarely realise how important this sport was for our ancestors. We must remember that football is quite an ancient team sport - a fact that can be surprising even to the biggest of its fans. The origins of this discipline reach the ancient times of today’s Mexico. Back then, it looked completely different, although it shared three crucial features with its modern version: a field, two teams and one ball, that was used to score points. But the point of this game wasn’t just fun. The playoffs were a part of rituals and were symbolising the never-ending war between the forces of good and evil, as the matches were a real fight for life or death. While selecting wall murals football for your interior, it’s good to remember the incredibly long and eventful history of this sport.

3d football wallpapers are a great way to decorate a room of a true football fan. A wide selection of designs will help every adult fan of football, who’s already outgrown their fascination of football stars, find football murals that will fit their living rooms. So, let’s leave the footballers wallpaper for children’s room and look for a bit less childish decorations. A great choice are wall murals football with an image of an empty stadium in the night-time. The dark sky, the bright green of the field and the shine of spotlights create an energising color combination for modern, minimalist interiors.

Football murals depicting a football field seen from above are original decorations with an extremely minimalist character. A flat, borderline graphic form of the field will be a great complement of an industrial styled interior.

Footballers wallpapers, in a bit different form than the ones dedicated for a children’s room, will look great in a bedroom of an adult fan of football. In those interiors we focus on depictions of the players in form of pictograms, surrounded by other football symbols, such as a ball, a goal or a sport t-shirt. 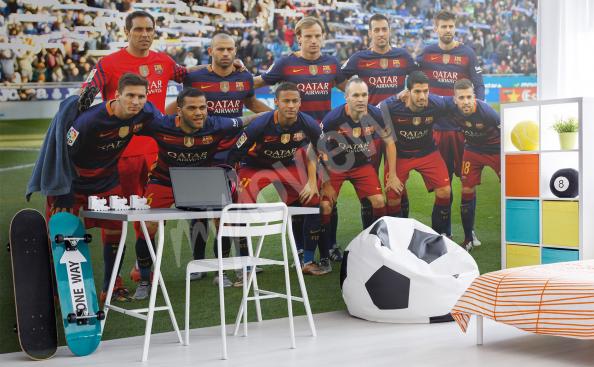 While selecting football-themed wallpapers, it’s worth to make sure they fit our living room’s decor. We should pay attention not only to the size of the room, but also the lighting. Spacious living rooms can be decorated with every kind of football murals. But, while decorating a small room, we must make sure that we won’t overwhelm and disrupt it’s proportions. An intimate living room can be optically enlarged with 3d football wallpapers. The sense of three-dimensionality will make your space gain on depth and give impression of being bigger than it actually is. On the other hand, underexposed interiors are best to be decorated with a mural depicting the green field or the daytime view on a stadium. A night version of such image will make our interior even darker.

Most boys that are interested in sport, dream to become a famous football player in the future. They’re following their favourite team’s matches, and they often relate to one of the players. Footballers wallpaper used as a decoration of their room, will be a dream come true.

The best choice are 3d football wallpapers with falling black-and-white balls. This motif will also be a great choice for an older fan of football - in a teenager’s room. For this type of interior, we can also select football players wallpapers, but the ones that don’t depict actual people, rather than their minimalist silhouettes.