We’d hazard a guess that most people in the world love cats! Cats are adored by children, adults, and seniors alike. Both men and women refer to themselves as cat people. It’s no wonder that all the decorations depicting these cute animals enjoy such great popularity. The Myloview team has prepared, among others, a set of amazingly original canvas prints with cats, which are so diverse that they can be used in almost any type of interior. We’ve also come up with plenty of ideas on how to display them in the most creative way possible! Whether you’re looking for something serious, humorous, stunning, subtle, or elegant, we have a suitable canvas print with a cat that will serve that role perfectly. 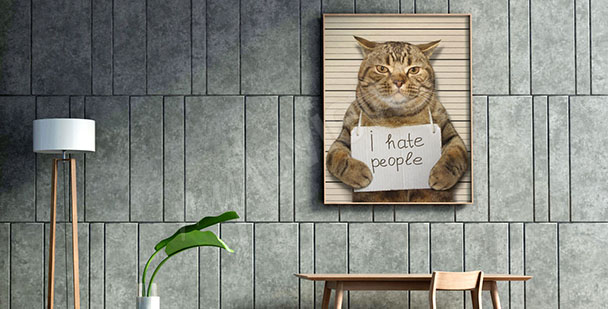 An amusing canvas print with a ginger cat will surely appeal to every teenager. 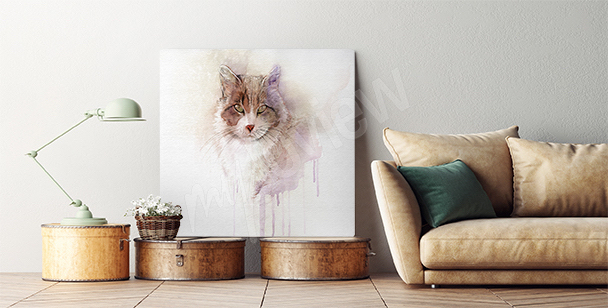 Every minimalist living room needs one powerful detail. A large cat print is a fantastic example. 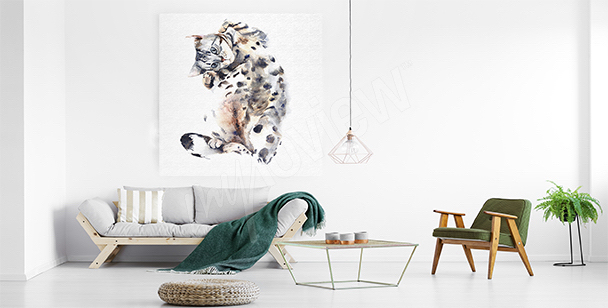 This speckled cat can be a fantastic addition to boho-style interiors. 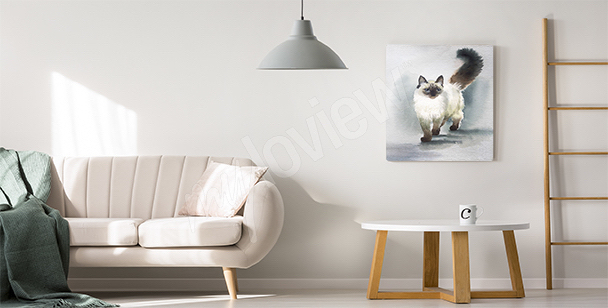 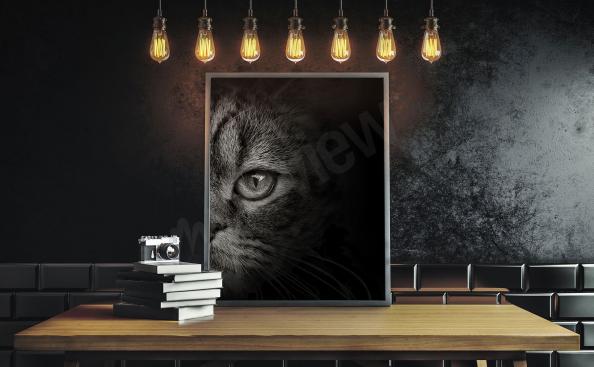 There are those who seem confused as to why cats are so universally adored. In those situations cat lovers usually say that there are two types of people - those who already understand it and those who won’t understand it anyway. Nevertheless, we’ll still try to provide an answer to this question. In order to fully grasp the reasons behind the tremendous popularity of our canvas prints with cats, we decided to take a closer look at these animals. First, we learned about their history. Cats were first domesticated as early as 4000 BC. A few centuries later they were considered sacred by the ancient Egyptians. We actually have a majestic canvas print with an oriental cat which is a bit reminiscent of the famous Sphinx and can be seen as a reference to that time period. In the Middle Ages stray cats had a difficult life. In many Europen countries they were believed to be the companions of witches and people practicing magic.

Here at Myloview, we came up with a way to use that as another source of inspiration. Hence, our catalogue features several mysterious, almost magical cats canvas prints. These designs usually depict jet black cats in particularly atmospheric settings, e.g. in a mist, under a starry sky, or surrounded with old tomes, candles, and tarot cards. But these aren’t the only designs that explore intersections between cats and history. For those of you who enjoy slightly less serious motifs, we have a collection of cats wearing archaic costumes, including a top hat or a flounced ball gown. These decorations are definitely on the more original side. That being said, let’s leave history behind and look into other reasons why cats are so incredible.

Capturing the beauty of nature: canvas prints with cats in various situations

When rambling on about the virtues of cats, people often insist that there is no animal with mor perfect body proportions. It’s hard not to agree. A healthy, well-fed cat is a little bundle of grace, dexterity, and agility. These are exactly the qualities that we wanted to highlight when designing our decorations. For example, our canvas print with a cat during a hunt can become an aesthetically expressive decoration that will make any interior appear more dynamic. 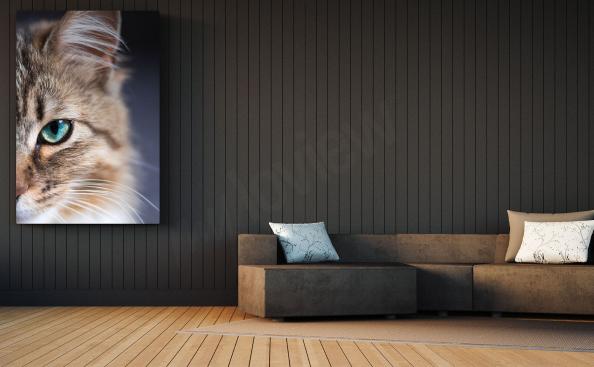 The design can be successfully used in a studio flat, a teenager’s room, but also in an eco-style apartment. However, let’s not forget that there’s more to cats than just physical prowess. Another undeniable advantage of cats is their irresistible cuteness. They are absolutely adorable when they play or when they sleep. If you share that sentiment, perhaps you should consider getting a cute canvas print with a cat for your wall. It doesn’t matter where you hang it, the room will instantly become brighter, happier, and simply more fun. Still, you can also play around with different depictions of cats and try to match them to particular interiors. For example, an image of a sleeping cat will be a perfect choice for the bedroom or the wall right by your most comfortable armchair in the living room.

A fairy tale kitty canvas print for a child’s room

Instead of photographs, many of our designs use beautiful graphics and illustrations drawn in various styles. Some of them are designed especially with children in mind. After all, almost every child adores kitties! Our collection of prints for a child’s room is very diverse – there’s no place for boredom in this interior! Some of our designs feature single, happy kittens (e.g. a ginger one curiously looking down from a rooftop). Others depict many animals in one print. Myloview also offers many prints featuring both cats and dogs. These types of designs are particularly popular among children who cannot decide which pet they love more. Prints for children are typically characterised by very colourful (but still subtle) aesthetics. This ensures that the decorations won’t be distracting for children who’re studying or trying to fall asleep.