Decorating modern flats with views of imposing metropolises, well-known towns and modernist architecture is all the rage nowadays. The easiest way to do it is through the use of posters and canvas prints. Tokyo is one the largest and most interesting metropolises in the world. The capital city of Japan, which is at the same time its most populous prefecture, has a lot to offer. With that in mind, we invite you to join us on an extraordinary journey around Tokyo! Our Tokyo canvas print with an urban landscape can be a unique gift for your family or friends, especially if they are interested in Asian cultures. 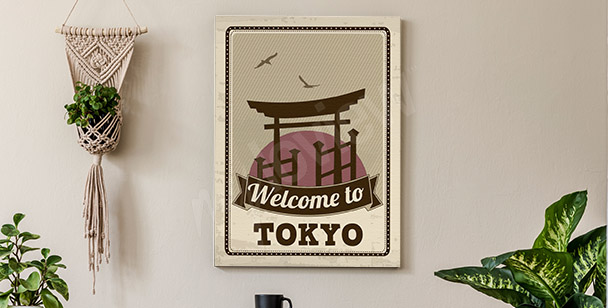 Traditional Japanese architecture is known for the characteristic Torii gates that lead to temples. They look beautiful in retro-style canvas prints. 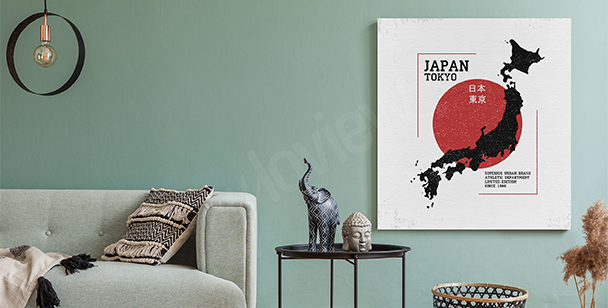 A canvas print with the map of “the Land of the Rising Sun” is a must in any interior inspired by Eastern cultures. 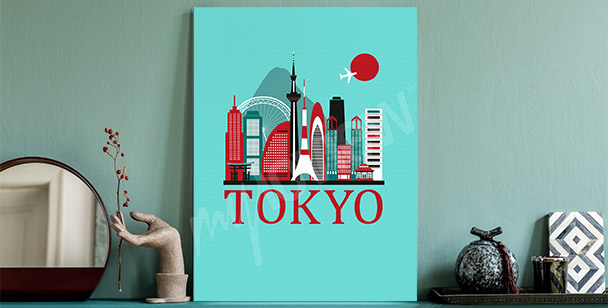 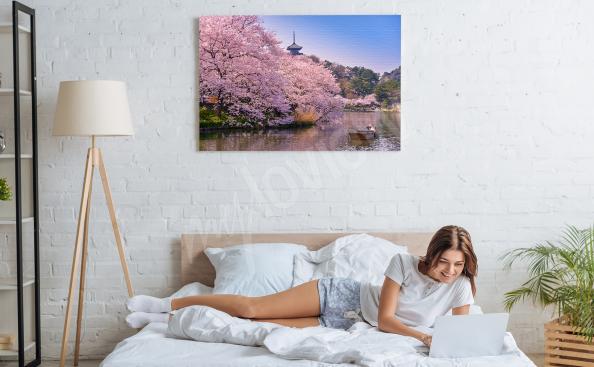 Around 40 million people live in this gigantic metropolitan area. Tokyo is not only the political centre of Japan but also a financial, educational, media and commercial hub of the Far East. The city has excellent public transportation that consists of, among other things, the longest network of high-speed railway lines in the world and a large network of expressways. What’s more, Tokyo houses the third largest stock exchange in the world and has an exceptionally high concentration of large corporate headquarters. All of the above should proves that Tokyo is an incredibly rich, advanced and modern city. However, if you’re still not convinced, simply take a look at our Tokyo canvas prints. This city is primarily known for its skyscrapers, glass elevations and bold architectural designs. Such views will do great as a decorative element in offices of large companies, enterprises or corporations. The designs which show the city at night, illuminated by thousands of lights, colourful adverts and billboards look especially stunning.

We’ve spoke at length about the modern architecture of Tokyo but the city has been around for a few centuries. It therefore also houses older buildings, such as the Imperial Palace and many historical temples and parks. The districts of Asakusa and Ueno are the old part of the city. In Asakusa, you can find the most widely visited Buddhist temple in Japan, Senso-ji. Other sights, which are worth mentioning include the Hie Shrine – a Shinto shrine from the 15th century, Kiyomizu Kannon-do – a Buddhist temple built in 1631, Meiji Shrine and Tomioka Hachiman Shrine. Respect for nature has always been a vital element of Japanese culture, which is reflected in the local architecture. One of its characteristics is the love of free space and asymmetry. Buildings and shrines typical of the Far East culture look absolutely gorgeous in the form of Tokyo canvas prints. The capital of Japan is the city of historic sites and artefacts, which make for stunning wall decoration designs, especially in interiors inspired by the Eastern styles.

A colourful combination: Tokyo canvas print and a bridge

As you probably already know, Japan is an insular country. Tokyo itself spans several islands and is divided by a network of rivers. This is exactly the reason why the city boasts so many beautiful bridges! The most famous of them would probably be the Rainbow Bridge. It’s white pylons are covered with lamps that illuminate the structure with a blaze of colours every single night. What’s more, the entire system uses solar energy collected during the day. Another famous Tokyo landmark is the so-called Dino Bridge, which got its name due to the characteristic shape that resembles a dinosaur skeleton. These examples of Japanese architecture make for amazing canvas print motifs. The bridges of Tokyo, both the modern and traditional ones, are both functional and stunningly beautiful… Especially at night or sunset! Decorations which depict them can easily be incorporated into any type of interior and you’ll certainly find something appealing whether you prefer modern or classic décor.